Yesterday, August 14, 2018, defense attorneys and prosecutors filed an agreement regarding the reliability of the Draeger breath-test units used in Massachusetts. Following hearings in January 2017 to evaluate the scientific reliability of breath-test results, the court initially excluded breath tests conducted on Draeger 9510 units that were calibrated after June 1, 2011 and prior to September 14, 2014.

As a sanction for crime laboratory misconduct, the court will likely enlarge the breath-test exclusion dates. The prosecutors proposed excluding subject tests prior to August 31, 2017. The defense attorneys proposed exclusion until calibrations are performed by an accredited Office of Alcohol Testing (OAT), a section of the Massachusetts crime lab.

Springfield lead defense attorney Joseph Bernard stated, “We pay millions of dollars in taxes each year and the Office of Alcohol Testing is the only branch in the forensic science laboratory that is not accredited. Our justice system and the public deserve more.” Bernard continued, “In driving under the influence cases, citizens lose their jobs, go to jail, and lose the right to operate a motor vehicle. The Office of Alcohol Testing is directly responsible for ensuring that breath-tests provide accurate and precise results.” Taunton Attorney Thomas Workman added, “To be trusted by the public, the evidence used in the justice system has to be correct, if not, then the trial is not fair.”

The additional exclusion timeframe is being set as a sanction for the withholding of court-ordered documents. The OAT had failed to produce over 400 documents that indicated calibration problems with the fleet of 400 Draeger 9510 units used in Massachusetts police departments. The OAT informed the court that they had produced all of the ordered documents, when they had not.

According to Workman, who discovered the withheld documents, “Over 36,500 subject tests prior to August 31, 2017 resulted in test reports that were over the legal limit. The Annie Dookhan drug lab disaster affected 34,000 defendants - making this crime lab problem the largest in history. If the Judge sets the exclusion date after August 31, 2017 - then there will be even more citizens impacted.”

In August 2017, defense attorneys filed a motion to reopen the case of Commonwealth vs Ananias and others, the case that ordered the exclusion of tests that depended on calibrations before September 14, 2014. The basis for the motion was the request for sanctions, based upon newly discovered evidence that had been withheld from both the prosecutors and the defense attorneys during the Ananias hearings.

According to Workman, who consulted in the motion for sanctions and worked with Springfield Attorney Joseph Bernard to negotiate the agreement, “The agreement took months to negotiate, and we all recognized what a serious problem resulted from the misconduct of some crime lab employees. The state police stepped in and promptly fired the manager of the OAT section, I think says volumes>”

The Executive Office of Public Safety and Security (EOPSS) investigated the document abnormalities at the OAT, and issued a 126 page report. The investigation revealed that the OAT had made “serious errors of judgment in its responses to court-ordered discovery, errors which were enabled by a longstanding and insular institutional culture that was reflexively guarded, which frequently failed to seek out or take advantage of available legal resources, and which was inattentive to the legal obligations borne by those whose work facilitates criminal prosecutions.”

The manager responsible for the OAT was promptly fired from her job. Over 20,000 documents were provided to the defense attorneys in August through December of 2017.

Bernard remarked, “Attorney Workman and I have spent hundreds of hours examining thousands of documents.” Workman added, “We automated the examination of many of the documents, which was necessary to understand the volume of materials that were turned over after the court decided the case.”

Bernard stated, “Much work still needs to be done. To correct many deficiencies that exist, the OAT must become accredited. But after the egregious behavior from the Office of Alcohol Testing, the Executive Office of Public Safety and Security's response was a great first step to begin the restoration of public trust.”

The agreement filed yesterday will narrow the issues for the court to decide, by reaching an agreement on some of the issues in dispute. The court will ultimately decide what order is appropriate, using the materials in the agreement as it finds appropriate.

The filed agreement is significant because it sets out agreed to facts that the Court can use in its deliberative process. In legal terms, these are stipulated facts, which are not all of the facts, but are the facts that both sides in the dispute agree are true.

Prosecutors have agreed that they will not attempt to introduce breath-tests prior to the extended date the court decides, with the exception of cases involving death or serious injury. While this agreement will survive the court's order, the ultimate order of the court could prevent the government from using any breath tests for any cases prior to some date.

The agreement not to introduce tests is the result of questionable practices at OAT, and in particular the subsequent production of documents that OAT had testified did not exist. Some defense experts believe that some of the documents were created after the fact. The agreement will avoid these disputes for most cases.

Prosecutor signatures create a contract that creates some obligations for the prosecutors in the Commonwealth, and those obligations survive elections and new prosecutors. For example, cases in the Superior Court or Juvenile Court will be governed by the agreement, even though the District Court decisions and orders do not obligate any judges outside of their court division.

The agreement and referenced reports are available on the website 9510.info, under the “News” menu tab. 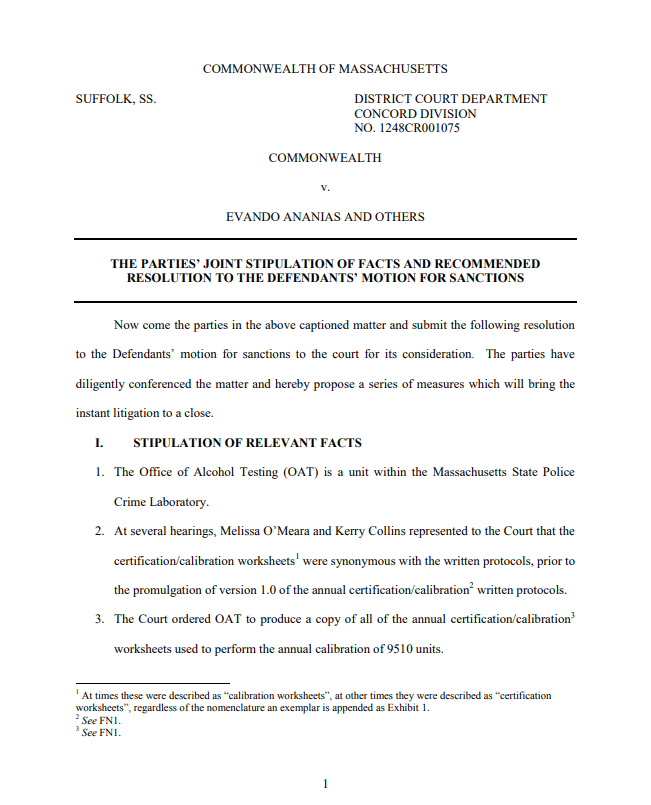