Hound Labs, Inc. purports to be

"a scientific device company that developed the first technology to rapidly, accurately, and inexpensively detect and measure the levels of both marijuana and alcohol in a person's breath." 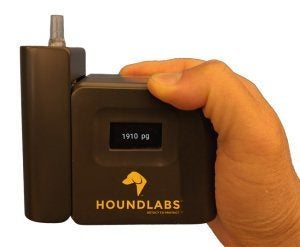 The corporation was formed in Oakland and was co-funded in 2014 by Dr. Mike Lynn, an ER physician, reserve deputy sheriff, and former venture capitalist and Mr. Kuni Oh, a patent attorney. They both additionally claim that they possess a "deep technical background in engineering and science."

They have created a breathalyzer that can detect the presence of marijuana on the breath molecules and calculate the amount of marijuana that had been ingested/smoked. This device is also alleged to be the least invasive way to measure both the amount of alcohol and/or the amount of marijuana in a person's breath simultaneously. In light of the June 2016 Supreme Court Decision where the justices decided that no warrant would be needed to execute a breath test but would be needed for any blood tests, this machine could assist law enforcement with their attempt at determining whether or not someone is driving under the influence.

Dr. Lynn founded this lab because he is passionate about deterring impaired driving and specifically identifies "the issue of marijuana-impaired driving [to be] compounded by the fact that there's no device on the market today that accurately detects and measures recent marijuana use. No portable device has been able to consistently measure THC in breath because of the tremendous analytical challenge in measuring THC at such low levels."

With litigation pending in Washington and in Massachusetts (Commonwealth v. Evando Ananias et al.) challenging the accuracy of the readings that breath test machines provide, it begs the question of whether the Hound Labs device is based off the same scientific principles. As this machine is only in trial stages at various law enforcement agencies and not currently on the market for sale, time will only tell if this machine will assist in the company's founders goal to deter marijuana impaired driving.

"although many researchers and companies dream of fielding a roadside test for driving under the influence of cannabis, such a product may still remain years away from practical service use. Millions of dollars' worth of speculative research will likely be needed to correlate data about consumption amounts with actual driver impairment. And the issue of stoned driving remains enormously complex, with experts still highly uncertain about marijuana's precise effects on cognition and competence."