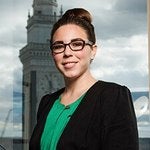 Erica M. Bruno is an associate attorney in the Law Offices of Joseph D. Bernard. She practices criminal law in district courts across the state. During her first year of practice, she worked as an AmeriCorps volunteer attorney at Central West Justice Center, a subsidiary of Community Legal Aid, where she represented clients in unemployment and employment matters. During law school, she was an intern in the federal district court in Springfield in Judge Mark Mastroianni's chambers. She also interned with the Office of the Attorney General, the City of Westfield Law Department, and the University of Massachusetts Student Legal Services Office. Now, Attorney Erica Bruno is able to assist Joseph Bernard with his cases, such as drafting/arguing motions, presenting at the BOA at the Springfield City Hall, and more. She also takes on individual OUI cases in Massachusetts by herself.