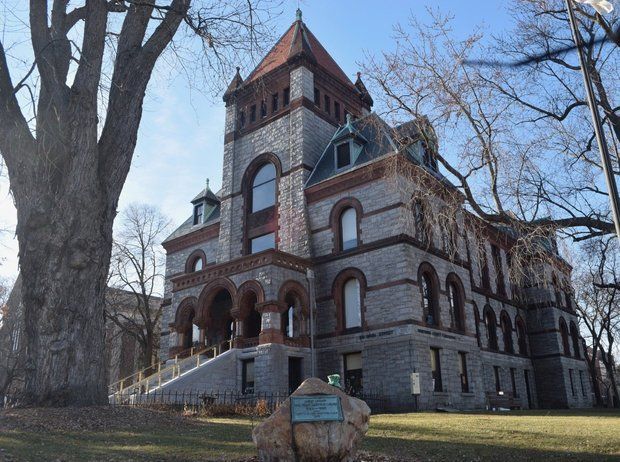 Mary Serreze for The Republican reported on April 21, 2017 that the Community Preservation Committee voted 6-2 on Thursday to recommend a $25,000 contribution toward restoring the old Hampshire County Courthouse in Northampton.

It's a smaller amount than the $45,000 requested by the Hampshire Council of Governments, which seeks $1.3 million from 20 communities to leverage a $3.5 million restoration of the 130-year-old building.

Committee chairman Daniel Rist announced that Mayor Karen Cadieux had voiced opposition to the expenditure. But he said the committee is authorized to make its own recommendations to the City Council when it comes to Community Preservation Act monies.

Rist spoke up for the courthouse restoration, saying it is "not just a Northampton project." He added that there is "a lot of history" in county government, which served Easthampton for hundreds of years.

Rist recommended shaving the ask from $45,000 to $25,000, saying the lower number is more likely to gain approval from the City Council.

Preservation committees in Goshen and Northampton have recommended spending $8,000 and $200,000 respectively, but Amherst has declined to contribute. Ford added that Hadley and Hatfield have each recommended $10,000 to appear on upcoming Town Meeting warrants.

Hampshire County legislative delegation asked for priority list to press Baker administration for release of bond funds. Three towns with community preservation committees -- Belchertown, Pelham, and Southampton -- have yet to vote on the matter. It's unlikely that towns without preservation committees will offer support. Of the 20 Hampshire County communities, nine have adopted the Community Preservation Act, allowing them to raise funds for special projects through a property tax surcharge.

Ryan Barry said he had spoken with constituents who do not support the Northampton-based project. "When we adopted the CPA, I don't think this is the type of project people had in mind," he said. "I want this to happen, but this is not the way I think it should happen," he said.

Greg Rolland agreed that "the process is bad," adding that "it's insulting" the state won't release bonding for the restoration without first seeing money from the towns and cities.

Nonetheless, he said he would support the project. "This will be less than two dollars per head in Easthampton," he said. "County government has served us for all of our history." Hampshire County was established in 1662.

The matter now heads to the Finance Committee for further discussion, and will be the subject of a public hearing before the full City Council on May 10.

About six years ago an architect assessed the 1887 building's needs, thanks to a $300,000 private grant. It was found that the foundation was cracked, the roof was leaking, the tower was crumbling, and the granite stairs were pulling away.

Since then, $500,000 of the state bonding was released to restore the two granite staircases. The second $3.5 million phase would repair and preserve the tower, roof, masonry and foundation.

The council is housed at the old courthouse, and manages the building, which contains the Hampshire County Law Library.

Each community has been asked by HCOG for a preservation contribution proportional to its population. A private fundraising effort is also underway.

To read the full article.